A cult television campaign, it lasted seven years (and then was re-adapted and elaborated through time up until our days), in which an unforgettable music theme composed by Greek musician Vangelis (Evangelos Odyssey Papathanassiou, 1943-), arranged in different styles, accompanies the stories of families and affective relationships, in the total absence of dialogues except for the famous ending payoff line “Where there’s Barilla there’s home”, that makes the pasta the canter of family life and its symbol, as likewise of good tradition and of the best sentiments.

MOSCOW
Agency: Young & Rubicam
Creative director: Gavino Sanna
Art Director: Gavino Sanna
Copywriter: -
Directed by: Nikita Michalkov
Director of photography: Franco Di Giacomo
TV Producer: Alessandra Ferrari
Production Company: Film Master
Editing: Roberto Crescenzi
Music: “Hymne”, Vangelis
Arrangement: Jinglebell
Interpreters: Natasha Hovey (her), Serghej Martinov (him), Vsevolod Marionov (maître), Yuri Bogatiriov (a water that does not understand the language)
Location: Moscow, Red Square, Kremlin
Year: 1989
Duration: 60”, 50”, 45”, 4 x 10”
ASB Code: Spot: BAR I Re 1989/1,2, 3, 4,5,6,7, 8
Back Stage: BAR I Rel 1989/1; Mixer, RAI 2, 29 January 1989 BAR I E 1989/9
Abstract: A young couple of tourists are visiting Moscow. It is full winter: the Kremlin, the Red Square and the entire city are covered in snow. After a happy day spent walking through the city and going for a sleigh ride, the couple goes to supper in an elegant restaurant, but they do not understand anything of what is written in Cyrillic characters on the menu. They are worried but at the same time amused, and call the waiter and mime to him the typical gesture of rolling spaghetti on a fork. On her lips can be read the word “pasta” – it can be seen clearly. The maître in the meantime reaches them and understands immediately and goes to start an orchestra playing and brings back a box of Barilla Spaghetti 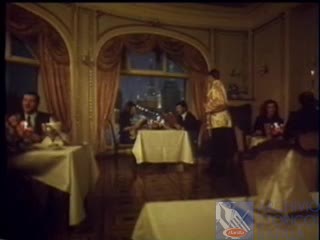