Agency: CPV
Creative director: Mario Belli
Art Director: Mario Belli
Copywriter: Francesco Alberoni
Directed by: Piero Gherardi
Director of photography: Dario Di Palma
TV Producer: Paolo Limiti
Production Company: Gigante
Music: authors of the various songs
Arrangement: -
Interpreters: Mina Mazzini, Elena Tricoli (body double – stand in)
Location: Naples, Rome, external filming locations
Year: 1966
Duration: 150”
ASB Code: BAR I Re1966/11-12 13-14-15
Abstract: This series of commercials is authored by the set designer, costume designer, and for the occasion also film director Pietro Gherardi, who for the Barilla commercial chose the setting of non conventional and evocative locations and designed particularly elaborate and eclectic clothes for Mina. For the song “Ta-ra-ta-ta” Mina is in an inside location in a completely bare environment with white walls (it is a building in construction). She advances towards the spectators until she reaches the front of a mirror in which, in addition to her own reflection, the film director and all of the filming crew are reflected; while she keeps singing, she moves along a corridor supported by beams and she finds a swing set; she sits there and starts swinging, and she finishes her song on the swing.
“Se telefonando” (if while we telephone) and “Mai così” (never like this) are instead filmed on the roof of the Train Station of Naples, while she wears dreamy clothes (one is covered in long black twisted strands, the other has a long black and blue mantle with round holes).
For “Non illuderti” (do not get illusions) Mina doubles up thanks to the her body double, Elena Tricoli, and once more roams the empty halls of a building in construction, wearing a wig with blond curls.
In “L’ultima occasione” (the last chance) Mina is instead in a field among pasturing horses, at the foot of a Roman aqueduct.
In this series of commercials two different endings are alternated.
One begins with the close up of Mina’s face framed by pasta boxes and continues with her walking behind the whole array of Barilla products while she explains: «With Barilla, a masterpiece of pasta, you can create every day a masterpiece of good cooking. B stands for Beautiful cooking (1). B stands for Barilla. With Barilla you can reveal the great chef that is inside of you».
In alternative endings the Barilla logo is lowered from above and Mina accompanies it with a hand gesture. Then the camera focuses only on her hand that, like the hand of an orchestra conductor, makes a different box of pasta appear with each gesture. In the background, she explains: «With Barilla, a masterpiece of pasta, a masterpiece of good cooking flows out from your hand. B is for Beautiful cooking (2). B is for Barilla». 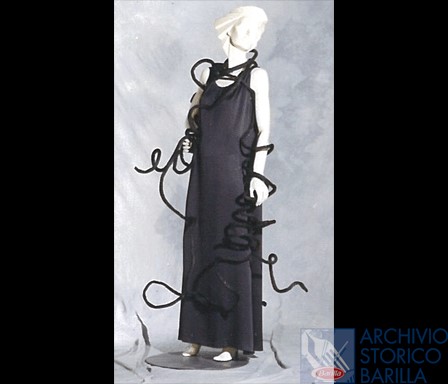 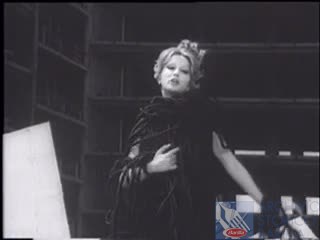