The backstage photos of Carosello with Mina (1967)

– Wonderful painting! Who is the author?
The recovery of the films of Barilla advertisement for Carosello enriched the Historical Archives with amazing images featuring exceptional testimonials and opened the way for study and research to identify authors, directors, screenplay writers and to recover significant information to integrate the archives. Thus, important names of the world of show business were progressively coming into the scene and there was constant attention on this theme. That year, Antonia came to help us, and she had great experience with the company and was by now close to retirement.
When we recovered the Pavesi archive in Novara – and this is surely another story to be told – we also found a monumental size and very heavy slow motion camera, and I had it brought to Parma. The Barilla technicians rebuilt the electrical wiring and with the help of an old film-editing technician, we got it working again. Thus, I was able to view the series of Carosello films with Mina that were shot in 1966 by director Piero Gherardi (1909-1971). Using cotton thread bought in a sewing supply store, I marked the most significant and in focus frames inserting the thread into the film’s drag holes, to have them duplicated.
I was just placing the duplicated slides in order on an overhead projector when Antonia, standing behind me, said: “I have already seen those photos…”
–It is impossible! I had them duplicated from films that just got here and no one besides me and the technicians of the production studios that helped us to place the films in order could physically access the material.
– But I tell you that I remember those photos. I saw them several years ago, but they are so special that I could not forget them.
– Then, if you saw them “several years ago” it must mean that it was in 1966!
– No, no, I was not here yet; I am speaking of about five or six years ago.
– Then you should try to remember where you saw them, and most of all, we should try to understand where they might be now.
– I think they were among the papers of Dr. Allodi. Before devoting himself to Mulino Bianco, he worked in the pasta field for some time…
– Where could we look for them?
– I would try at the central archive, if perhaps they were still there.
– Pardon me, but what do you mean for central archive? Nobody ever told me anything about it…
– It is the large archive where all of the offices place the documents to be stored in time. To go there, you must either have documents that belong to you to retrieve or you must get authorization.

The following week, with the blessing of the President’s Office, Antonia and I entered the doors of a large industrial building hosting a compact archive that flowed on tracks with special handles.
Miles of bags and binders. Antonia, with some confidence, led me to the pasta marketing section and we looked at those shelves with attention. What I was reading made me faint. Hundreds of extremely important files were stored in that place.
– Antonia, what happens to these in the end?
– Every once in a while someone comes and throws away the oldest things!
Folly! That place should have been checked thoroughly and all that could be useful to reconstruct the history of the company must be retrieved. I later spoke about it with Dr. Ganapini – Pietro Barilla’s Assistant – and in a few months of work we marked all of the important files to keep and we transferred them to the Archives. Today, after many years of work, over a mile of documents have been catalogued and every envelope is easy to retrieve.
But in the meanwhile, Antonia was moving back and forth like a wave and was reviewing a shelf and pulled out a large bag out.
– I was sure they were still here!
She rejoiced triumphantly. I pulled out of the bag black and white 30×40 centimeters photos showing Mina captured during the filming of the Carosello advertisement directed by Piero Gherardi.

A multifaceted creativity guided him in the making of two series of Carosello films (10 short movies) for Barilla Pasta in 1966-1967: his were the surreal and fantastic costumes, though always elegant and refined, made by the Gabriele Mayer tailor shop. His was the choice of a bare set design to place the diva in the center spot. His the choice of Mina’s make up, from time to time sensual, jaunty, mysteriously impenetrable.
The envelope bag was addressed to Dr. Allodi. I turned the photos over and I saw the photographer’s rubber stamp on the back: Piero Pascuttini, Rome.
– Who knows if he still has the negatives?
The telephone book helped me to find him quickly. But no one answered at that number. There were no alternative ways. I wrote the number on a piece of paper to keep handy. I called every day at a different hour, taking note of the time. Finally, after a few weeks of useless attempts, someone answered the phone.
The photographer had been travelling. Yes, Piero shot the photographs on the sets of the Barilla Carosello campaign. Pascuttini (1936-2009) was the photographer of the Divas and was specialized in photo shootings on cinema sets and for television. No, we do not have those anymore. A month ago, we sold them together with the archives, to the Grazia Neri Agency.
My heart skipped a beat. Had we found them a few weeks earlier, those photos now would be in the Archives…
A train brought me to Milan, where Grazia Neri gave me an appointment. Large photos covered the walls. Someone led me to a small office. On the table, there was a folder. The desk lit up and shining slides took life under my eyes. But they were color negatives! We had black and white photos! The horse of the Coliseum square at EUR was draped with a yellow mantle! Blue skies, breath taking sets. An amazing photo shooting, and about one hundred photos in the whole. Do you also have black and white photos?
–This is all we have about this topic. Perhaps they stayed with the photographer.
Now a copy of those incredible images are in our Historical Archives. But we still have not found the negatives of the black and white photos… Maybe, one day, who knows? 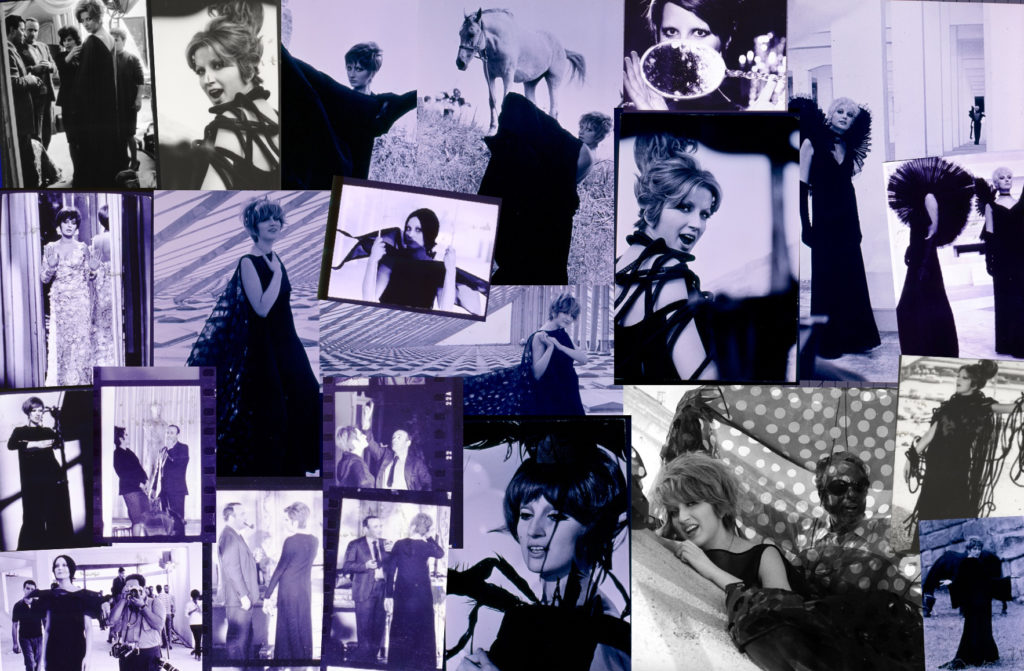